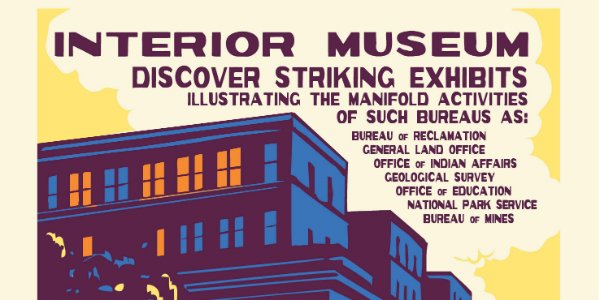 They say a picture is worth a thousand words, but how many words is a reproduction of a beautiful historical poster worth? Since 1973, Doug Leen has been working to tell the story of posters that disappeared from history for over 30 years.

As part of the Federal Art Project, more than 2 million paper and cardboard posters were printed based on 35,000 different designs. These designs were used for subjects such as art, travel, education, health, theater, and safety. There were also posters created to promote national parks and monuments. Unfortunately, 33,000 designs have been lost forever, and less than 2,000 posters can be found today.

When they were produced, each edition would only have between 50 and 100 posters produced. After the project ended in 1941, these national parks posters disappeared into history until seasonal park ranger Doug Leen came across one for Grand Teton in 1973. After about 20 years of searching, Leen was able to find 13 negatives for the poster in the National Park Service archives in West Virginia, which were used to help reconstruct its template. 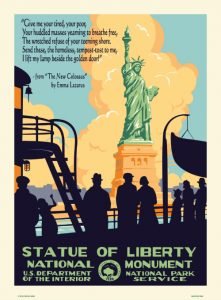 Reproducing these posters wasn’t easy by any means. Leen first had to separate the screens from old black and white photos, which were in very poor condition. He spent nearly five years figuring out how the prints were made, only being guided by his original. The black and white photos were analyzed, as well as art from the same time period, to determine the appropriate colors for the posters. From there, all his proceeds went towards paying artists to redraw screens and publish them.

During the original 1938 program, only 14 national parks registered to have posters created. After Leen and his team finished reproducing templates for this historic set, many other national parks commissioned Ranger Doug to continue the series using contemporary images “in the style of” the WPA.

Ranger Doug’s Enterprises is the only faithful group reproducing WPA national Park serigraphed posters; and their goal is to produce posters for each of the main National Parks by the Centennial of the National Parks Service in 2016.

When Leen decided to continue publishing the posters, he found Scott and Cam Corey, owners of Corey Sign & Display, in Poulsbo, Washington. Scott and Cam are third generation screen printers – a profession that started with their grandfather in his Seattle shop.

Other shops had previously turned down the poster project because they didn’t want to bother with this specialty printing. The Corey brothers, on the other hand, were excited for this opportunity. This work was a change of pace from the usual sign orders that they fulfilled; and their father was excited to see fine art being produced in the shop again.

The two brothers worked for many years on the posters until Cam passed away from ALS in late 2009. Leen mentioned that “[Cam] was a great guy, and it was a real loss for us.” Since then, Scott has been continuing poster production by himself.

An Opportunity to Help

About a year ago, Leen wanted to expand poster production. Scott  Corey referred Leen to Cole Graphic Solutions as “the only other quality shop in the Puget Sound area.” The Cole team thought the project was cool, despite being outside the normal scope of work. Thriving on thinking outside the box, they decided to evaluate the feasibility of the poster project.

Cole was able to listen, learn, and flex new muscles to meet unique customer demands. Since then, the team has earned the right to do business with Ranger Doug Enterprises – working to finish the remaining posters with Corey Sign & Display before the 2016 centennial!

The next poster being produced by Cole Graphic Solutions is for Yellowstone National Park (pictured below). History has never looked so good! 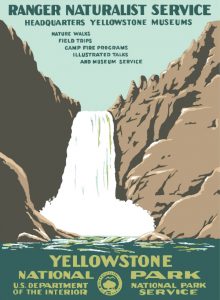 You can read more about Ranger Doug’s background and travels by visiting his personal website.

Historical information from RangerDoug.com and correspondence with Doug Leen.